For the third year in a row, Chase Masterson has been selected to be Queen of the Sexiest Geek Alive 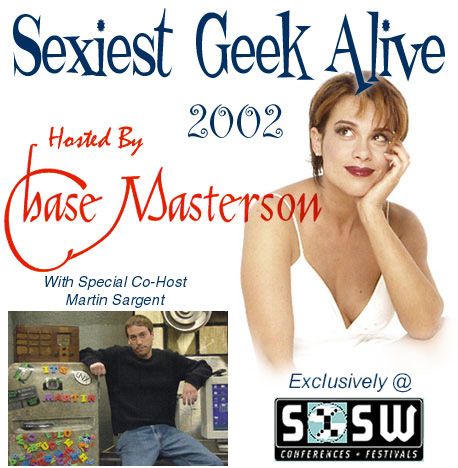 AUSTIN, TEXAS - March 8, 2002 - The search is on for the Sexiest Geek Alive. The finals will be held at the SXSW Interactive Festival, which runs March 8-12, 2002 at the Convention Center in Austin, Texas. Chase Masterson, best known as "Leeta" from "Star Trek: Deep Space Nine" will return to host this year's finals.

After its successful launch in 2000, which garnered over 18,000 registrants and unexpected international media attention, Sexiest Geek Alive founders expanded the search, increased the coverage, and found a prestigious venue for the Sexiest Geek Alive 2002. SXSW Interactive Festival, the convergent media showcase attended by thousands of the most creative minds in the technical industry, provides the perfect forum to attract the sexiest geeks.

Masterson was on hand least year to introduce Ellen Spertus, the 2001 pageant winner and a computer science professor at Mills College in Oakland, California, who stole the show when she strut in wearing a circuit board corset and a slide rule strapped to her leg. "The Sexy Geek contest is hot," says Masterson. "It's got it all - brains, more brains and sex appeal!" Chase Masterson is also known for TV Guide's Online Reader's Poll's favorite science fiction actress on television.